Highlight: Trying out some indoor target practice with an AK47, shotgun and submachine gun.

Lowlight: Being herded like cattle airside in Warsaw Modlin Airport. This small, ex-military (now ultra low cost carrier) airport is suffering from serious overcapacity in the summer peaks. There were even queues for the queues!

Feat of Architecture: Standing-out more prominent than any of the modern skyscrapers, Stalin’s dissonant gift of the Palace of Culture and Science.

Recce fact: 35% of Poles are reported to be in diaspora, with approximately 20 million people of Polish nationality/descent living elsewhere around the globe.

What a pity that it’s virtually impossible to find any establishment in Western Europe willing to let me loose with an array of firearms purely for some jolly good fun. Fortunately  though, like many Eastern European states, Poland has no such qualms.

Poles often consider their country to be the “geographical centre” of Europe. So why choose Warsaw (Warszawa) for the first mission and not the more popular/touristic Kraków? Well, Warsaw is the capital and largest city, once razed to the ground and rebuilt after WWII. I have absolutely no doubt that, like Lithuania, Poland has some rather grim and downtrodden towns and districts. But Warsaw is 100% modern and thriving with shiny new skyscrapers everywhere you look, with some of that good old Eastern Bloc style mixed in for good measure.

A “Subtle” Gift from the Soviet Union

Just what Poland wants after enduring centuries of on-off Russian occupation and struggle; the tallest building in the country in the Stalinist architectural style as a constant reminder. It’s nearly as if it stands mockingly in dissonant defiance at the army of modern skyscrapers surrounding it, knowing that it will always be the most prominent. Yet there are no plans to tear it down along with the other 500+ communist monuments that Poland vowed to demolish in 2016, no longer wishing to be reminded of feelings of repression from the era. Russia have naturally taken great offence to this, seeing their role with the Red Army as liberators of Poland from Germans during WWII.

It is certainly possible go inside the complex and take the small elevator to the top (for a fee). But sure, who wants to be on the inside looking out when the awe is in the exterior?

Polish Military History and the Bitter Relationship with Russia

If you’re a military history pundit or enthusiast, you will be absolutely spoilt for choice in Warsaw with: the Museum of Polish Military Technology, the Museum of Communism, the National Museum, the Museum of Independence, the Polish Army Museum, the Museum of Pawiak Prison, the Mausoleum of Struggle and Martyrdom, the Warsaw Uprising Museum and more. Other options include visits to the largest Jewish Ghetto (and Museum of the History of Polish Jews) or the museum and birthplace of Maria Skłodowska-Curie. Marie Curie named the first chemical element she discovered after her beloved country; polonium– a highly radioactive and deadly element found to be the cause of KGB defector- Alexander Litvinenko’s death. Well, it’s the thought that counts.

The Warsaw Uprising Monument is one of Poland’s proudest and most symbolic, yet one could be forgiven for mistaking it for a socialist realism-type memorial such as those erected by the Soviet Union in tribute of the Great Patriotic War. The monument has indeed been subject to some criticism for this very reason. The 10-metre high bronze memorial stands in honour of the thousands of insurgents who fought and died for their country in the 1944 Warsaw Uprising. Despite being the largest resistance effort in Europe during WWII to fend off German troops, it was not successful. 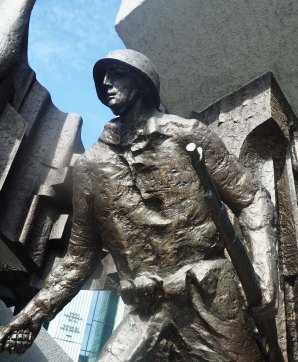 So why is there so much resentment between Poland and Russia until today? Polish history documents a plethora of reasons, but here’s a big one: the uprising fighters wanted to rid their country of German occupation before the Red Army advanced into Poland from the East. The Kremlin (Stalin) gave orders to halt the advance before the border and essentially let the uprising fail, which it did, stating that they simply couldn’t afford the support at that time due to other priorities. It is generally thought by Western Europe that this was a deliberate strategy to allow the Red Army to become the “liberators” of Poland, but not before Germany completely razed Warsaw to the ground. Russian history books differ in this account, but what is evident is that the Communist Polish People’s Republic censored any positive references to the Home Army and instead promoted the brave efforts of the People’s Army. Many of the survivors of the uprising ended up in a gulag or were interrogated and executed for treason or crimes against the state. This explains why the Uprising Monument wasn’t erected until 1989 with the collapse of Communism.

The former Pawiak Prison is open to the public, where you can wander around the cells and read about the victims who were interrogated and tortured/executed within, primarily when the prison was controlled by the Gestapo. What is most surprising is how many women (school teachers etc.) were among those executed within the prison walls or sent to Nazi concentration camps. There is a very eerie moving silhouette directly facing you at the end of the cell corridor that is guaranteed give you the willies.

Now onto something more cheerful- a military vehicle/weaponry exhibition outside the Museum of the Polish Army (Muzeum Wojska Polskiego)– hooray! Be sure to inspect the heavily chewed metal on those tanks. 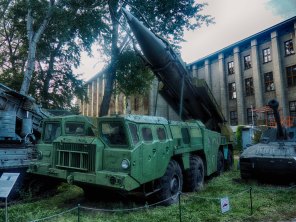 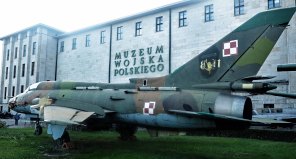 Don’t mess with this estate. 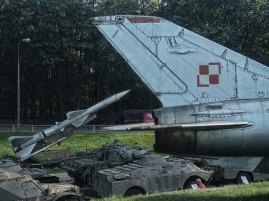 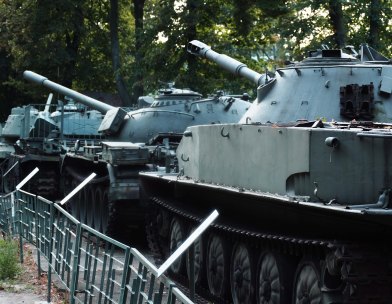 The Not-So-Old Town of Warsaw
Delighted to see you haven’t skipped the very important historical context waffle above, as I hear you rightly enquire “but you said Warsaw was 85% destroyed during WWII- how can there be an Old Town?”. Well, it was painstakingly rebuilt using original masonry where possible and has earned itself a place on UNESCO’s list of World Heritage Sites as “an outstanding example of a near-total reconstruction of a span of history covering the 13th to the 20th century”. The romantic account of the story is that 18th century paintings were used to reconstruct the city to its former glory, but we know that a few “new and improved features” were also included for good measure. If we all had a chance to re-shape history no doubt we all would too.

A Polish Shoot ‘Em Up

The thing that nobody ever stresses enough is that guns are friggin’ LOUD. Even with industrial grade ear defenders, one pistol shot sounds like Mount Etna. The macho gun gang won’t admit to it, but it’s not the kickback that one fears when anxiously squinting down the barrel trying not to tense up, but the abrupt and explosive bang which emanates from one’s own hands. So there I was thinking about the devastating potential of this array of firearms with which I was entrusted, working myself slowly up to each shot, when I turned around and saw a 12-ish year old boy with his father next to me, professionally firing away coolly and calmly like “it ain’t nothin'”. It was then I decided that I might as well bite the bullet (apologies, that was genuinely incidental) and embrace it. Besides, I’d only ever managed to get my hands on a 22 and L98 cadet rifle in the past- ptffff.

Out of the lot, the pistols were the most annoying, especially the Glock with it’s strong recoil and never-ending cartridge of bullets. The submachine gun was rapid and a real buzz to fire, but you have to pump the trigger in short intermittent bursts because you will inevitably spray your bullets gradually upwards to the sky like in cartoons and you really don’t want anything ricocheting off the ceiling beams and someone “lossing an eye”. You will at some stage get pelted by your own bouncing, hot shells; it’s all part of the experience. The AK-47 does what it says on the tin and the laser aim is nice. But there is no greater satisfaction than the pump action of a shotgun, and analysing the shot pattern of a million tiny holes embedded in the target afterwards. I couldn’t help but remember Norwegian death metal band-Mayhem’s Dawn of the Black Hearts album cover (the less descriptive I am about that, the better). 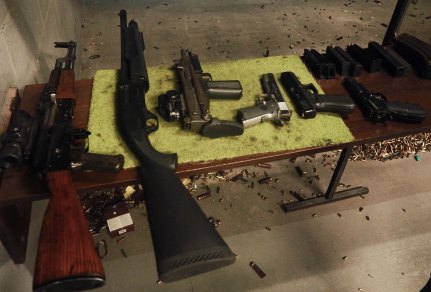 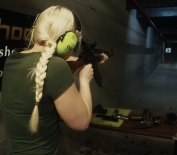 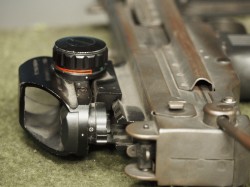 By virtue of the diaspora, you probably don’t need an education on what Polish cuisine comprises. Polish supermarkets can be found worldwide these days, where you can buy 1001 types of sausages (kiełbasa among the most popular), dry mixes for polish cakes (sernik cheesecake is highly recommended), pierogi (dumplings with meat, cheese, potato or cabbage- don’t forget the śmietana) and various types of kapusta (cabbage/saurkraut).

But you really have to go to Poland or find a local babcia to whip you up some proper bigos (saurkraut and meat stew), gołąbki (pigeons- only messing! Although this is the literal translation of these stuffed cabbage rolls) or kaszanka (black pudding). Zapiekanki are an unmissable street food consisting of a baguette-style pizza with a garlicky mushroom base topping. 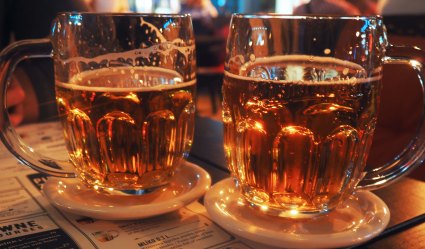 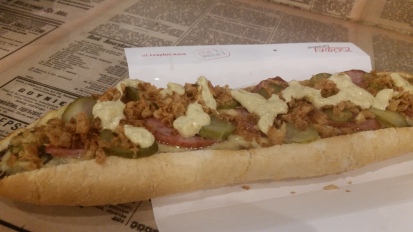 I find Polish foodstuff to be excessively artificial, with desserts laden with artificial vanilla flavourings, the vast assortment of supermarket juices are 99% unnatural, packets of sliced meat and sausages have that plasticy consistency, stews taste distinctly of Kucharek and snack foods are not even particularly tasty (e.g. Flips- like completely tasteless puffs. What’s the point? It’s like Walker’s Wotsits’ poor Polish cousin). Yet Poles seem to be much more health-conscious than many of their Western European counterparts, apart from the weekend piwo (beer), and obesity is scarce. Speaking of the weekend piwo, if I had 1 złoty for every batshit crazy drunk who randomly approached and declared/yelled something emphatically and walked on, I’d have done pretty well. Best steer clear of Polish football hooligans though…their reputation precedes them.

I’m not sure why many insist on pronouncing the name of famous 19th century composer “Chopin” with a French accent. He was very much Polish! So much so, that the capital’s main airport is named in his honour. For a bit of folk, I always revert to the Warsaw Village Band featuring twangy Bulgarian-like vocal sounds and a hurdy-gurdy.

Polish rock bands Myslovitz and Kombii are well-known and well-loved. And not neglecting the metal scene, Poland is home to the death metal veterans Vader, and Decapitated. The country has also cultivated a few national socialist black metal bands but they shall most definitely not be featuring in the Reconnaissance Euro Jukebox under the Polish flag! 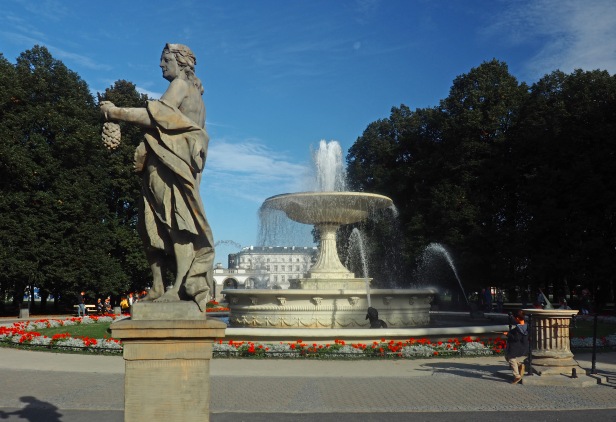 Until I visit a few other notable Polish destinations on the mission list I can’t speak for an entire country, but in Warsaw, I found the locals unexpectedly friendly. For example, after stumbling upon an outdoor nightclub down a hidden alley, we soon found ourselves in the middle of the dancefloor clinking glasses and shouting “Na zdrowie!” with a bunch of skinhead youths who didn’t seem to want to rob/stab us, or perhaps a suitable opportunity just didn’t arise. Lively parties, good shooting, countless military museums and zapiekanki for supper every night. I’d call that a mission success.

Chuch Of The Holy Spirit

Tomb of the Unknown Soldier